Those Who Did Not Make It - Part I - Arsenal XI

In this Part I of an up-coming series, I want to focus on players that used to play for youth sides of Arsenal Football Club but didn’t make it.
The players had to meet two criteria to be considered for this Arsenal XI.
1) Had to be part of the Arsenal youth set up for at least 2 years
2) Must not have started more than 20 games for the first team (sorry Matthew Upson)
It was quite a tough task to narrow it down to eleven players and on a lot of players, you might not agree at all. I also have to admit that I only really looked at recent years; so nothing before 2000 because I couldn’t be a good judge of that at all. But let’s see who made it. 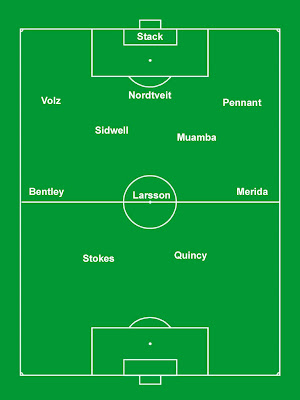 Graham Stack:  1998-2006, 5 starts, 0 goals
I couldn’t really decide between Stack and Stuart Taylor. Taylor certainly played for the more prestigious clubs over the years but only made a handful of appearances while Stack played regularly. Stack had good spells with Millwall and Leeds and currently plays for Hibernian in Scotland.
Moritz Volz: 1999-2004, 1 start, 0 goals
The German signed from Schalke in 2001 and went through the ranks at Arsenal. Lots of competition however meant that he never stood a real chance at the club. Whilst still at the club he had loan spells with Wimbledon and Fulham, for which he eventually signed on a permanent basis. In five years, Volz made 108 starts for the Cottagers and is now playing in Hamburg, Germany for St.Pauli.
Havard Nordtveit: 2007-2011, 0 starts, 0 goals
Another position that I struggled with. The names Senderos and Upson immediately sprung to mind but both didn’t qualify as they played way to many games for the club. Nordtveit signed with the tag of being one of the most promising defenders in Europe, but as a young central defender it is very hard to get game time. During pre-season in 2010 he impressed as a right-back but that didn’t stop his permanent move to Gladbach in January 2011. Under coach Favre, the young Norwegian excelled and was a key member of the Gladbach side who miraculously avoided relegation.
Jermaine Pennant: 1999-2005, 12 starts, 3 goals
Pennant is clearly a more offensive player, but as I’ve seen him play full-back, I’ve chosen him in this position. I actually think Pennant could have made it at Arsenal. Maybe not as a starter, but as a solid back-up. But it is very tough to get into a team that is called the Invincibles. In 2005, he opted to leave and after heaving good years with Birmingham City and Liverpool he arrived at Stoke City via Spain outfit Zaragoza.
David Bentley:  1997-2006, 5 starts, 1 goal
Bentley went through the ranks at Arsenal and was always rated as a very good talent. During the 2003/2004 campaign he had a good run-out and scored a fabulous goal in a cup tie against Middlesbrough that created a lot of attention. But that wonder-goal did not help his progress at Arsenal and he left the club. He had a fantastic spell with Blackburn Rovers before making a multimillion pound move to Tottenham Hotspur.  Due to a clever high percentage sell-on-clause Arsenal pocketed nearly £7m when he moved to Spurs.
Steve Sidwell: 1999-2003, 0 starts, 0 goals
Sidwell got his Arsenal career never really going, thus an early move to Reading seemed a reasonable choice. Steve did very well there; over 160 appearances and roughly 30 goals. He then ambitiously decided to sign for Chelsea. It didn’t really work out and after just a handful of appearances, he moved to Aston Villa where he played for three years. Currently he is playing for Fulham.
Fabrice Muamba: 2002-2007, 2 starts, 0 goals
Muamba, a strong central defender, signed for Arsenal as a 14-year old. Muamba who as of now featured an impressive 33 times for the England u21 side has been ever-present in the Premier League for the last years. After leaving Arsenal, he followed the path of many and signed for Birmingham City where he showed his talent; a talent that was spotted by his current club, Bolton.
Fran Merida: 2007-2010, 7 starts, 2 goals
Merida’s arrival was very special and controversial. He, like Cesc Fabregas, was snapped up from Barcelona’s youth system. Because both were Spanish, came from Barcelona and played in similar positions, early comparisons between the two were very likely. Under Wenger, Fran got from time to time, a little game time. Playing mostly in Carling Cup ties he also featured in the Premier League. Merida could have had a future at Arsenal with Wenger disappointed to see him leave, but the young Spaniard decided a move to Atletico Madrid was the best thing for his career.
Sebastian Larsson: 2001-2007, 7 starts, 0 goals
I have always liked Larsson and he is a good player, but probably simply not good enough for Arsenal. He, like a lot of young players, got some Carling Cup games before calling it quits on his Arsenal career. The Swedish International too, took the road to Birmingham City. A path that has proved very fruitful for Arsenal talents. He had a fantastic spell at City, including a Carling Cup victory, but after the club's relegation he decided to stay in the Premier League and signed for Sunderland.
Anthony Stokes: 2003-2007, 0 starts, 0 goals
Signed as a promising 15-year old, the Irish striker found it very hard to get into the Arsenal team. Early loans with Falkirk helped his development as player but not his career at Arsenal. Over the years he had spells with Sunderland and Hibernian before signing for Celtic Glasgow in 2010.
Quincy Owusu-Abeyie: 2002-2006, 8 starts, 2 goals
Quincy spent his early years at the famous academy of Ajax Amsterdam before moving to Arsenal. His speed and skill raised attention early on and secure him a couple of starts in an Arsenal dress. Similarly to Merida, Quincy could have stayed at Arsenal but decided to leave very early. He signed for Spartak Moscow, a spell that included several loan spells before sealing a move Al-Sadd Club. Last season, the Qatari club loaned him to Malaga, and this season he will play for Panathinaikos.
Get involved and let me know your personal Arsenal XI of players who didn’t quite cut it at Arsenal.
Cheers,
Simon