It is an absolute understatement to say that Inter have been the center of attention during this summer's Transfer Market. All of their star players have been linked with moves away, and the club have been linked to just about every player not named Zlatan Ibrahimovic. It has been a stressful time for any Inter fan, but if you are like me, than you have faith that the club will figure this mess out and come back stronger than ever.
With each passing day, new rumors pour both fear and joy into the heart's of Inter's faithful. It almost seems as if their has been just too many transfer reports about Inter to even dream about attempting to create a list of the departures and arrivals that have been linked with the Italian Giants. Well, I am going to attempt to give you a look back at this crazy summer of reports about the club I love. The following list contains my opinion about each player. Enjoy!
DEPARTURES -
Let us start with departures so that we can see just about every Inter player get linked elsewhere!
KEEPERS
DEFENDERS
MIDFIELDERS 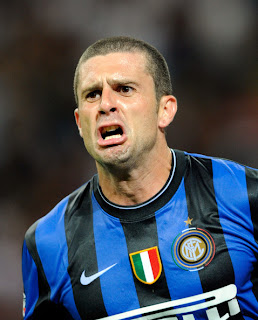 FORWARDS
So that is my take on the possible departures for Inter this year. Just remember, anything can happen over the next two weeks. Come back for part TWO!! As I discuss Inter's potential arrivals!