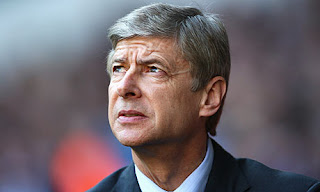 Wenger..... must stop gambling
Is he the greatest manager in the club’s history? Yes, he definitely
is. He certainly can look back on a good number of years in which the
club did so well under his tutelage, but all that is in the past now as
those years filled with trophy-laden glory have been replaced in more
recent times by a six season drought of trophies, thanks to Mr.
Wenger’s stubbornness in sticking to his youth policy.

Not only is Wenger stubborn, he is perhaps the biggest gambler in
football, as evident in his refusal to buy a defender during the
January transfer window last season, even when it was becoming clear
that TV5’s injury then would keep the Belgian international out for
virtually the whole of 2010/11.

Rather, Wenger kept his faith on a leaking backline with the likes of
Sebastien Squillaci just as having to watch such players as Nicklas
Bendtner, Abou Diaby, Marouane Chamakh, Manuel Almunia and even Swiss
defender Johan Djourou wear the Arsenal jersey was frustrating. These
players never should have come anywhere close to the red and white of
the Gunners, let alone wear it and worse yet, play in it at the heart
of the club’s defence.

This makes me wonder what it would be like if the squad that made up
the legendary ‘Invincibles’ played against the current squad, perhaps a
5-0 demolition of the current squad with Thierry Henry getting past
Squillaci with great ease and Dennis Bergkamp using his sultry skills
to leave Djourou helpless in his wake. And it would be unimaginable to
see either of Chamakh or Bendtner get past Tony Adam or Martin Keown
or even Sol Campbell; who had two spells with us.

Yet in all this, Wenger has forged ahead with his gambling by letting
Gael Clichy go to Manchester City, without getting a replacement that’s
better than the Frenchman and by the look of things in the transfer
market, he may not be getting one before the season starts in a few
weeks time.

The pre-season match at FC Cologne made me realize what a mess that
side of Arsenal’s defence would be should Kieran Gibbs be our starting
left-back in the coming season as the young English international was
found wanting on numerous occasions where he failed to do his primary
job as a defender, mostly after his forays forward.
I cannot make clearly enough the horror that awaits if he is to face the likes of
Gareth Bale, Antonio Valencia, Nani and Aaron Lennon among a host of
others in the fast, physical nature of the English Premier League.
Hopefully not you say? I wish I could share your optimism but it’s the
grim state of things.
In my opinion, Wenger must stop gambling or else the trophy drought will continue.
What do you think? Am I the only one that thinks so?
Thank you for reading and please share your opinions.
Written by Adedeji Henry Oluwafemi
Follow him on Twitter: @Henrysenal
Posted by oalmasri at 10:04 PM

Get a grip! You are just feeding on Tabloid hatred. Year-in-year=out Arsenal have performed to the highest... Arsenal have been ranted at over and over again out of sheer jealousy of the role Wenger, a foreign manager, has played in augmenting the standard of football in England. If Wenger were English no Tabloid would treat him in this most incredulous manner. You always overlook the fact that the man has overseen the construction of one of the most modern stadiums, built a new team and managed to develop talents that other premier league managers have fail to produce in the past six years. A very loyal and humble man who is, no doubt, the most academically sound manager in the game. How many premier league managers could boast of a degree? How many English managers stay loyal to a club when big money offers come their way? This man has turned down lucrative offers to make sure that Arsenal remains a leading football club. Recent survey showed that the club is among the top ten performing sporting clubs in the world, Second only to Man United in the UK. I think all those who banter illogically about Wenger should get more understanding about him and the club or shut up.

Not great on the objectivity front is it,Henry (first choice) ghosting past Squilaci,(fourth choice)
Or Chamack (one season in the league) trying to beat Adams (legand), What about Alan Smith V Vermalin of RVP against Keown and dont tell me Walcott would not skin Dixon.Stop being so negative the past has been glorious but the future could be !!!

I keep imagining what kind of club ARSFNAL FC would be if Arsene Wenger leaves cos I was opportuned to see Arsenal match before Wenger arrives, may be i wud av been Barca supporter by now if they still play like that! About signings the total fault is not to Wenger but the board should take the larger part bcos Wenger doesn't have the final say board does. I could remember Lady Lina,former Arsenal share holder saying they should sack all the board members, she knew why she said so even when she has Ŋø share again. The whole thing Į̸̸̨§ñ't about Wenger alone but the board too. The spain giants board do most of the signings, Į̸̸̨ts JU̶̲̥̅̊§τ̲̅ for the Manager τ̅☺ anounce. Wenger needs τ̅☺ review his physiolophy though, he doesn't have τ̅☺ be rigid all through.

@james. I love your passion and admired your courage,always good to know and hear from die hard fans like you. Well i want to say i'm the number one fan of this great club. I have known and love arsenal all my life,the nature of journalism and writting of article doesn't permit sentiment,you just have to say it the way it is,6years without a trophy is not the best for a top club like arsenal. Check this out from your own comment' the most sound manager accademically in the game'' arsenal is a proffessional football club not a academy. I know what AW can do, he's a great manager,he can win trophies with team if he bring in 2 to 3 matured players,
Thank you for reminding us about the forbes magazine top ten list, finding arsenal in number 7 shows that the club is financial buoyant. So what should stop le prof from getting a LB since we all know its not lack of fund?Thats by way. Lets have your opinion do we need a LB or not? Thank you. Onelove gonner

@omoyeni. You 've really done well in extending the blame to the board. But buying of players by the board or president has never been part of arsenal tradition, things like that could only bring confusion among the manager and the board. Wenger deserved all the blame, two seasons ago the club statement has it that £45m was issued to wenger as a transfer budget, he spent only £10 on TV5. This outgone season same amount of money he only brought in squillaci for £5m and chamakh for free,what would you call that? and now he has £60m and arsenal only signing is gervinho for £10.6. Not forgeting the cash from the sales of Adebayo,Toure,Hleb and Clichy.